Diamonds shape – diamonds come in a variety of shapes. The most popular diamond shape is the round brilliant cut, which represents about two-thirds of all diamonds sold. Other popular shapes include the princess, cushion and emerald cuts.

There are several very popular fancy diamond shapes as well, which include the pear, heart and trillion cuts. Who can say which one is the most beautiful? It’s a matter of personal preference and taste. But each has certain advantages and disadvantages when it comes to its overall look and brilliance as well as the price per carat.

Below is a list of the top 10 diamond shapes in terms of popularity. I also give you a general overview of each shape’s strongest points along with its weakest. It’s important that you know what to look for as you evaluate your options.

This blog post introduces you to each shape and includes details to help you decide which size, color and clarity would best meet your needs. But before that, you need to know that diamond shape and diamond cut are not the same.

The Difference Between a Diamond Shape & Cut

Cut, shape…when discussing diamond shape and cut, people often regard these as the same, but they’re not. A diamond’s shape is distinctly different than its cut, although the terms are quite often used interchangeably, which you’ll even notice me doing in this article.

However, it is important to point out the difference.

Click here to see a round shaped diamond with an ideal cut grade, and here to view one with a good cut grade.

Each shape is unique in how it shines, and this is what determines its sparkle. Let’s now take a closer look at the top 10 diamond shapes in terms of popularity.

The Top 10 Diamond Shapes in Order of Popularity

The round cut diamond is the most popular diamond shape, representing approximately 75% of all diamonds sold. Due to the mechanics of its shape, the round diamond is generally superior to fancy shapes at the proper reflection of light, maximizing potential brightness.

Round diamonds are often referred to as “round cut diamonds”. Due to their shape, round diamonds reflect light better than fancy shaped diamonds, maximizing the brightness.

Princess cut diamonds are the most popular fancy shaped diamonds. They first came on the market in 1980 and people especially love them for engagement rings. Like round diamonds, the princess shape works well in almost any ring style or setting.

Since oval-shaped diamonds are basically an elongated modified brilliant-cut, as are all-round diamonds, these two shapes have essentially the same fire and brilliance. Because the oval cut is longer in shape, it does appear larger, even though it may be just an illusion.

The marquise is shaped like a football. Due to its trimmed corners some people refer to it as a modified brilliant cut. Like the oval, the marquise is elongated so it does give the illusion of being larger than it really is. In terms of carat weight, the surface areas of marquise cut diamonds is among the largest of all diamond shapes. So, if you want a large looking diamond a marquise would be a good choice.

A cushion cut diamond is similar to a square cut, but with rounded trimmed corners. It’s called a cushion-cut because it resembles a soft pillow. The cushion cut is a classic, having been in existence for nearly two centuries. During the first 100 years, the cushion cut was the most popular of all diamond shapes. With a more refined cut in recent years, it’s regaining some of its popularity.

Emerald cut diamonds have a very unique look resulting from step cuts of the pavilion as well as the large open surface table. Rather than giving off the type of sparkle that a brilliant-cut diamond has, an emerald-cut creates a hall-of-mirrors look, with both light and dark surfaces playing off one another. Due to the large table on emerald-cut diamonds, inclusions are easier to spot as well as color.

Asscher cut diamonds were first introduced in Holland by the Asscher Brothers in 1902, as a precursor to the emerald cut diamond. The Asscher cut is a square version of the emerald cut, but with a higher crown, smaller surface table and larger step facets. This makes it sparkle with more brilliance than you would see with an emerald cut.

The radiant cut is the first rectangular-shaped diamond to have a full brilliant-cut pattern of facets on both its crown and pavilion. As you can imagine, this makes for a vibrant sparkling diamond. The shape is a modified square that resembles both a princess and cushion cut. The radiant cut looks spectacular whether it’s set with square or rounded cornered diamonds.

Heart-shaped diamonds are another modified-brilliant cut and they undeniably convey love, whether given as a solitaire pendant or set in a ring. Small heart-shaped diamonds of less than a half-carat should be avoided because the shape is difficult to make out. This is especially true when setting with prongs.

Diamonds Shape with the Most Sparkle

Although the shape does impact a diamond’s brilliance, it’s certainly not the only feature that causes it to sparkle.

As we’ve discussed in other articles, the quality of a diamond’s cut will greatly influence how much it sparkles. A GIA diamond with Excellent cut quality or an AGS diamond with Ideal cut quality will look spectacular in any shape. But you can’t really expect a round brilliant cut to sparkle much if the diamond’s cut grade is just Fair or Poor.

Which Diamond Shape is the Most Expensive?

Round diamonds with a brilliant-cut are the most expensive. Therefore, a round brilliant cut diamond 1-carat in size will cost more than a 1-carat diamond with the same cut quality, clarity, and color in another shape.

If you’re wondering why it’s because so much of the rough diamond has to be cut away and literally wasted to achieve the round brilliant cut and polish. What remains of the original stone is only about 40%, with 60% having been cut away.

The diamond shapes or cuts that are most affordable are the ones in which a large portion of the original stone remains, which are as follows:

Having said that, a diamond’s own characteristics will also impact its overall value and price. One reason an emerald-cut diamond is priced lower than a round brilliant cut is its large table, which allows inclusions and color to be more noticeable. If you want an emerald cut diamond, you may want to choose a higher clarity and/or color grade than would be necessary if you got a round brilliant cut.

Which Diamond Shapes Appear the Largest?

Diamonds with an elongated shape tend to look larger than round or square-shaped diamonds. If you want an impressive looking large sized diamond, you should consider a pear or marquise cut because their surface areas tend to be larger in relation to the carat weight of the diamond. These are the elongated diamond shapes that look the largest:

Of all of these, a marquise cut diamond typically appears the largest because it is longer than the others, with a face-up size that simply looks more impressive.

If you ‘re wondering which diamond shapes look the smallest, it would be the Asscher, cushion and princess cuts. Because they are fundamentally square-shaped their surface tables and diameters are small in relation to their total carat weight. 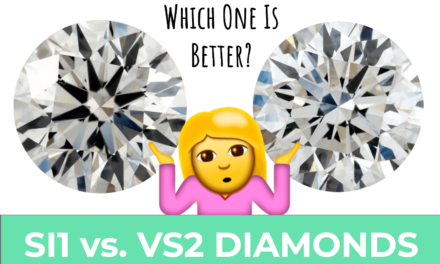 SI1 vs VS2 Diamonds – Which One Is Better? 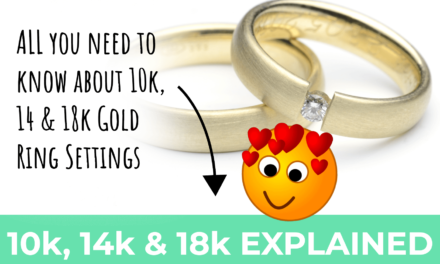 All You Need to Know About 10K, 14K and 18K Gold Wedding & Engagement Rings 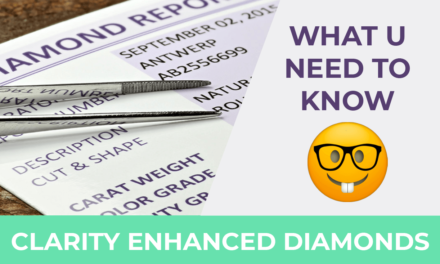 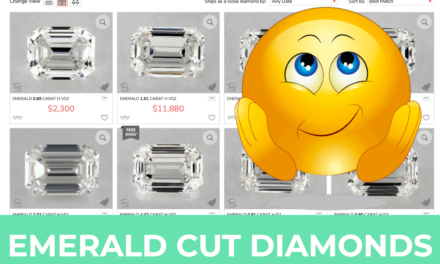 Everything You Need to Know Before Buying an Emerald Cut Diamond

James Allen is one of the most reputable online vendors for diamonds. Their high quality and full transparency through 360-degree videos have convinced thousands of people. MyDiamondGuide is a blog  dedicated to help people find the perfect diamond engagement ring.  I learnt all the tricks form experts who work at GIA and know where it’s possible to save a great deal of money without compromising on the beauty &  quality of your diamond.